Followers of Van Gogh's Chair may have noticed I have not posted in quite a while. Not sure how to explain, except that I got a bit blogged out. How to inject a little life in one's online writing? Start a new blog! This one, dedicated to Italy and things Italian (art and travel especially), is called The Raving Italophile. Hope to see you there -- Ciao!
Posted by Sheramy Bundrick at 3:30 PM 9 comments:

"The Bedroom" Is Back!

The first version of "Vincent's Bedroom in Arles" -- painted in Arles in October 1888 -- returns to display today in the Van Gogh Museum, following an intensive and successful six-month restoration. A special display, "Bedroom Secrets," reveals the conservation process and complicated history of the painting for visitors. But hurry: the mini-exhibition of "The Bedroom" will only remain in Amsterdam until September 19th; after that, the picture heads to Japan for a Van Gogh retrospective co-organized by the VGM and Kröller-Müller Museum.

More details, including before-and-after photos and an account of the conservation process, can be found on the Van Gogh Museum's website and on the conservators' blog, Bedroom Secrets. My hat's off to the conservators for a fantastic job: even in photographs, one can see how much brighter the colors are after cleaning, details previously obscured now more visible. Most importantly, this painting, which was in a very fragile condition prior to restoration, is in a much safer state. The fact the VGM is sending it to Japan shows how confident the museum is; it almost never traveled in recent years because of its condition. I enjoyed reading the conservators' updates throughout the process and their interesting discoveries. Congratulations to the VGM on what must be a very exciting day!
Posted by Sheramy Bundrick at 2:34 PM 3 comments:

Have You Seen This Painting? 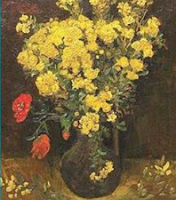 The only van Gogh painting in Egypt has been stolen...again. An 1886 still-life of poppies and viscaria (F324a, JH1137 for those keeping score in the catalogues raisonnés) disappeared yesterday from the Mohammed Mahmoud Khalil Museum in Cairo and contrary to early published reports, has NOT yet been recovered. (Note to CNN on tv: update your crawler.) This particular painting, valued at about $50 million, was purloined in 1978 but recovered in Kuwait a decade later; nine different paintings were taken from this same museum last year, so something is clearly amiss with security. Easy to see what: reports this morning are that only seven of the museum's 43 security cameras were working, and that none of the individual alarms on the museum's paintings worked, either. The museum's records show only ten visitors to the museum yesterday. Police tracked and arrested two of them, a young Italian couple, at the Cairo airport yesterday afternoon...but the painting is still at large. If you see it, call the cops immediately! (Wild speculation: could it be an inside job, with the Italian couple used as a diversion à la "The Thomas Crown Affair"? Someone who knew the alarms and cameras were not working? Hmm...)

I've noticed a couple of the news stories have illustrated the wrong painting with their reports: the one pictured here is the correct canvas. It is one of a series of floral still lifes produced by Vincent while he was living in Paris and thought to date from summer 1886 (some of the stories have the wrong date, too). They are 'practice pieces' -- studies Vincent did to explore his ideas about color theory. Friends and obliging local florists provided him with blooms to paint.
Posted by Sheramy Bundrick at 10:01 AM 2 comments:

News from Caravaggio's world...the painting an art historian from the Vatican thought might be a Caravaggio, announced in L'Osservatore Romano last week? Um, not so much. The Vatican's chief art historian, Antonio Paolucci, admits in the latest L'Osservatore that the painting is likely a copy of an original by a follower of Caravaggio, although he was careful not to disparage his colleague who had suggested otherwise.

In other news, attendance figures have been released for the Caravaggio show at the Scuderie del Quirinale this spring...try 600,000 visitors. For a show that featured only about 25 paintings, that is downright amazing. Vincent draws that many at some venues (often more, granted). But Caravaggio? Told you he was HOT. As for the all-night opening of the Galleria Borghese and Caravaggio-owning churches in Rome last week, an estimated 20,000 visitors followed the trail. WOW!!
Posted by Sheramy Bundrick at 5:39 PM 15 comments:

I'm going to put on my classicist hat for blogging today and say that I can't BELIEVE I haven't realized next week is the 2500th anniversary of the Battle of Marathon (490 B.C.)! I'm serious, I can't. Today Reuters has a news story about two Greek long-distance runners who plan to recreate one version of the Marathon legend: that Pheidippides ran from Marathon to Sparta (where he couldn't get help), back to Marathon, and *then* from Marathon to Athens. (The modern marathon race was inspired by the Marathon-Athens leg of Pheidippides' trek. p.s. He died.) Maria Polyzou and Panayiotis Skoulis will run the 325 miles from Athens to Sparta to Marathon in six days' time, from July 26th to August 1st. The route begins at the Akropolis and ends at the Tomb of the Marathonomachoi (Athenian dead at Marathon, who received hero-cult in the Classical period). Polyzou has not only run marathons for 23 years, she's also director of the Marathon Museum and trumpets the historical significance of the anniversary. Apparently this run will be like a double marathon every day for a week, and apparently Skoulis has done it before (!!). Celebrations in Greece will continue and will culminate in the Athens Marathon on October 31st, which is expected to have about 20,000 participants this year.

Shout-out to my sister and brother-in-law, themselves marathon runners, who plan to take on the Disney Marathon (again) in January 2011. Being closer to a library cat than a cheetah, I won't be joining them. But I may have to re-read Aischylos' Persians next week for the anniversary...
Posted by Sheramy Bundrick at 5:46 PM 3 comments:

It's the 400th anniversary of his death this year -- this week, in fact -- and Michelangelo Merisi da Caravaggio (aka my second favorite painter) is hot hot hot. Record-attendance exhibition in Rome at the Scuderie del Quirinale, other exhibitions in Florence and elsewhere...check. Stolen Caravaggio recently recovered...check. A group of scientists announcing they've found Caravaggio's bones and are installing them with honors in Pont'Ercole, where he died...check (although on this one I'm tempted to say, Isn't that conveeeeenient?). And now this morning, none other than Vatican officials are speculating whether they've "discovered" a new Caravaggio. What would Caravaggio himself think of all this fuss? Well, unlike my friend Vincent, who I believe would be embarrassed and bewildered over the modern attention paid to him, I suspect Caravaggio would guzzle it like a good Chianti. Caravaggio was anything but shy!

I went to Rome earlier this summer (for the fourth time) and followed my own Caravaggio trail. The Scuderie exhibition was *amazing,* to say the least. By the time of my visit, about four of the paintings had already gone home or on to other shows, but the twenty or so that remained -- all securely attributed paintings by the master -- were knockouts. Even with massive crowds, Caravaggio's work has the power to smack you around and call you chump. The Scourging of Christ (from a Vienna museum) was the one that affected me the most, not having seen it before in person. The Taking of Christ (in Dublin) was another powerful piece. A special treat was seeing the first version of The Conversion of Saul (or The Conversion of Saint Paul): that version was rejected by its patrons, and Caravaggio's second version is the one hanging in Santa Maria del Popolo today. The first version is in a private collection and is seldom displayed in public. (Mille grazie, by the way, to the nice guard who pitied short little me and led me to the front of the pack for a good look-see!) In Florence, before coming to Rome, I had just missed by three days (THREE DAYS?!) a big show on Caravaggio and the Caravaggisti, which means I also missed the Uffizi's Bacchus and their works by Artemisia Gentileschi. Caravaggio's Medusa, though, was on view all by itself in a spotlit room, watched over by a bored guard filing his fingernails. Three trips to the Uffizi, and I'd never seen the Medusa. She's fabulous.

Other stops on my Caravaggio trail in Rome: the churches of Santa Maria del Popolo (Conversion of Saint Paul, Crucifixion of Saint Peter), San Luigi dei Francesi (the three Saint Matthew paintings), and Sant'Agostino (Madonna of the Loreto). Also paid a visit to the Chiesa Nuova to see the original site of the Entombment, although the painting now hangs in the Pinacoteca of the Vatican Museums. The Galleria Borghese to see their paintings they hadn't lent to the Scuderie. The Galleria Doria Pamphilj (Mary Magdalene). And just for pure atmosphere, a swing through the creepy little backstreet the Vicolo del Divino Amore, where himself lived during his last and most turbulent months in Rome. I didn't see any plaque commemorating Caravaggio's time there, but once I entered the almost-alley, I didn't exactly stick around!

Last night, to commemorate the anniversary of Caravaggio's death, the Galleria Borghese and the above-mentioned churches stayed open all night -- with free admission -- for his devotees to pay their respects. I bet there were a lot of them. The first time I walked 'the trail' in 1996, I had the churches to myself. Now you jostle with hordes of admiring fans. Oh he's hot, all right. And somewhere he's smiling.
Posted by Sheramy Bundrick at 11:01 AM 2 comments:

You know the World Cup Final is serious business when a city's museums post huge banners in support of the national team. This photo comes from the Van Gogh Museum's Twitter page; apparently the Rijksmuseum has a banner too. The Museumplein will be hopping on Sunday!
Posted by Sheramy Bundrick at 8:28 PM 5 comments: